Click here for my articles for the book of: Proverbs

Click here for my reading the book of: Proverbs

The Book of Proverbs (Hebrew: מִשְלֵי, Míshlê (Shlomoh), “Proverbs (of Solomon)”) is the second book of the third section (called Writings) of the Hebrew Bible and a book of the ChristianOld Testament.[1] When translated into Greek and Latin, the title took on different forms: in the Greek Septuagint (LXX) it became Παροιμίαι Paroimiai (“Proverbs”); in the Latin Vulgate the title was Proverbia, from which the English name is derived.

Proverbs is not merely an anthology but a “collection of collections” relating to a pattern of life which lasted for more than a millennium.[2] It is an example of the Biblical wisdom tradition, and raises questions of values, moral behaviour, the meaning of human life, and right conduct.[3] The repeated theme is that “the fear of God (meaning submission to the will of God) is the beginning of wisdom”.[4] Wisdom is praised for her role in creation; God acquired her before all else, and through her he gave order to chaos; and since humans have life and prosperity by conforming to the order of creation, seeking wisdom is the essence and goal of the religious life.[5]

A great video explaining the structure/layout of the Book of Proverbs:

The superscriptions divide the collections as follows:

“Proverbs” translates the Hebrew word mashal, but “mashal” has a wider range of meaning than the short catchy sayings implied by the English word. Thus, while roughly half the book is made up of “sayings” of this type, the other half is made up of longer poetic units of various types. These include “instructions” formulated as advice from a teacher or parent addressed to a student or child, dramatic personifications of both Wisdom and Folly, and the “words of the wise” sayings, longer than the Solomonic “sayings” but shorter and more diverse than the “instructions”.[7]

The first section (chapters 1–9) consists of an initial invitation to young men to take up the course of wisdom, ten “instructions”, and five poems on personified Woman Wisdom.[8] Proverbs 10:1–22:16, with 375 sayings, consists of two parts, the first contrasting the wise man and the fool (or the righteous and the wicked), the second addressing wise and foolish speech.[9] Chapters 25–29, attributed to editorial activity of “the men of Hezekiah,” contrasts the just and the wicked and broaches the topic of rich and poor.[10] Chapter 30:1–4, the “sayings of Agur”, introduces creation, divine power, and human ignorance.[11] 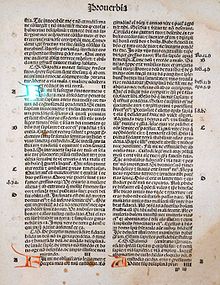 Along with the other examples of the Biblical wisdom tradition – Job and Ecclesiastes and some other writings – Proverbs raises questions of values, moral behavior, the meaning of human life, and righteous conduct. The three retain an ongoing relevance for both religious and secular readers, Job and Ecclesiastes through the boldness of their dissent from received tradition, Proverbs in its worldliness and satiric shrewdness. Wisdom is as close as Biblical literature comes to Greek philosophy, of which it was a contemporary; it shares with the Greeks an inquiry into values and reflections on the human condition, although there is no discussion of ontology, epistemology, metaphysics, and the other abstract issues raised by the Greeks.

“The fear of God is the beginning of wisdom” (Proverbs 9:10 – the phrase implies submission to God’s will[4]). Wisdom is praised for her role in creation (“God by wisdom founded the earth; by understanding he established the heavens” – Proverbs 3:19). God acquired her before all else, and through her he gave order to chaos (“When [God] established the heavens…when he drew a circle on then face of the Deeps…when he marked out the foundations of the earth, then I was beside him” – Proverbs 8:27–31).

Wisdom, or the wise person, is compared and contrasted with foolishness or the fool, meaning one who is lacking in wisdom and uninterested in instruction, not one who is merely silly or playful (though see the words of Agur for a “fool” who has wisdom, and could be seen as playful).

For the most part Proverbs offers a simplistic view of life’s “overall norms” with few grey areas: life lived according to the rules brings reward, life in violation of them is certain to bring disaster. In contrast, Job and Ecclesiastes are a contrast to the simplicities of Proverbs, each in its own way identifying any assumptions or expectations of the “wise” relying on these “norms” instead of on God alone as foolish.

A great video explaining the themes within the “Wisdom Literature” books of the Bible:

Additional Study Materials for the Book of Proverbs: